The offer is made under the seasoning framework. Temasek lobbied very hard for this framework with the aim of making it easier for companies (like herself) to issue bonds to retail investors as the prospectus regime is more onerous for Issuers.

Temasek launched its first retail bond last year and Singapore Airlines is the next to do this. Hopefully, we can see better quality bond issuances coming up under this framework. However, investors must continue to be discerning as other wholesale bonds such as Ezra or Swiber would potentially have qualified as well.

SIA intends to use the bond proceeds to purchase aircrafts.

Can SIA pay its bonds when it matures?

I will not repeat the good work done by other fellow bloggers. If you want a more detailed analysis on the financials or commentary that are worth reading, i have compiled them for you below:

iFast / Bondsupermart - If you want to have a comprehensive overview on the bond.

The Asia Report - If you need to know why you should avoid the bond. Side note - Although Warren Buffet's company did invest in Airlines subsequently after his disastrous investment.

I will share with you why i think SIA will be able to pay its interest and bonds..

Company is still highly profitable and paying good dividends - Some bloggers expressed concerned about the industry, the  "net debt" position and the low Return on Equity.

The first thing you can do to increase the ROE is to optimise the balance sheet. Having no debt on the balance sheet is not "optimizing" it.  To make equity work harder, you have to have some leverage (not a lot till it can't repay the debt), especially when interest expenses are tax-deductible as well.

Looking at the charts from the FY2018 annual report below, you will know that the Company continued to be profitable over the last 5 years (even though the profits has fluctuated, the operating profit is increasing). In addition, SIA has also pay a lot of dividend to its major shareholder, Temasek, over the same period (look at the dividend payout ratio). The dividend payout ratio finally dropped to 50% last year.  I would expect dividend payout ratio to be in this range or lower going forward given the net debt position. 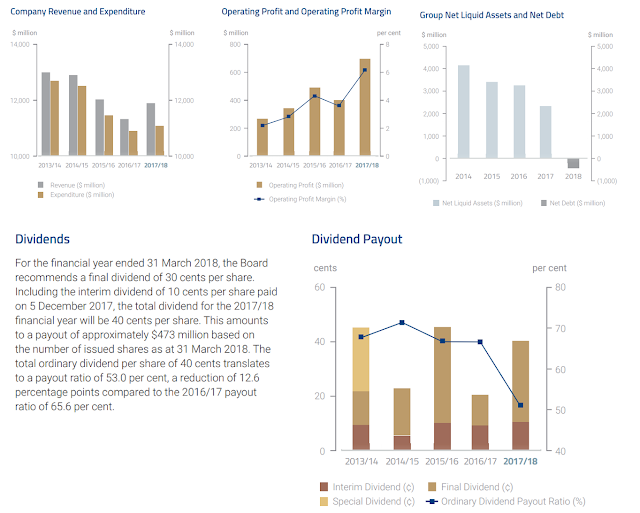 Given that it has received much dividend over the last few years, I would expect Temasek to inject equity (unlike the case of Hyflux) via rights issue should SIA requires cash given that it has a downstream impact on other companies within its stable as well. However, do watch out for signs if Temasek signals that SIA is no longer regarded as a strategic asset (as in the NOL case). Unlike NOL that has been bleeding, SIA is profitable and the pride of the nation, hence, i would expect that Temasek to continue owning it even though ROE is low.

The balance sheet is probably more "efficient" now with a debt to equity ratio of slightly below 50%, but i will watch the ratio very closely as i wouldn't want it to cross 50%. The aircraft financing business is pretty hot now and with the aviation boom, the assets can be sold for cash as the planes are young and should it wishes to do so.

Relative Valuation against its own bonds

Fundsupermart has issued a report and compiled the table below. It would have been more informative if they have also included the issuance size in the table. 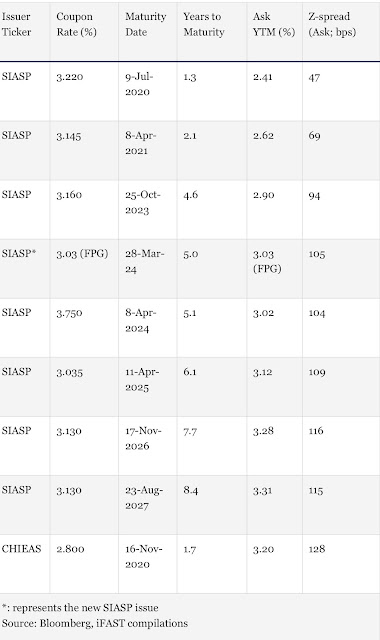 Let's take a look at other rated bonds out there.

Astrea IV is an Asset Back Security rated A by SnP and Fitch. The interest rate offered for the 5 year Class A-1 PE Bond was 4.35% with a potential bonus of 0.5% at launch. It last traded at 1.08. My write up was here. The bonds was very well received.

Similarly, Temasek launched its first retail 5 year bond that was rated AAA and offered 2.7%. The response from retail investors was overwhelming. My write up was here.

Compared to the above IPOs, i would venture to say that Temasek and Astrea left some money on the table for retail investors while SIA is more "stingy".

However, for the yield hungry retail investors here, who have limited investment options, probably the SQ scraps are better than the toxic Hyflux perps. If you ask me whether i think SIA will go belly up and default on their bonds over the next 5 years, i would say with a high conviction that it wouldn't. However, i am not too attracted by the 3.03% coupon either when i compare against the rated bonds, SSB or even interest rates in CPF special account.

Temasek is the largest shareholder with 56% - This is probably one reason why it can priced the bond at a lowly 3.03%. However, do note that NOL was also substantially owned by Temasek before it was sold (i.e. there is no sacred cow). The point i am making is that while being majority held by Temasek is definitely a plus, it doesn't mean that Temasek will step in if the Company goes under. Although morally, it may need to since it involves the mom and pop investors and has downstream impact on other Temasek portfolio companies.

Ability to pay debt is still intact - The leverage (or gearing) ratio of SIA (computed as total debt over equity) has been rising over the last 8 years. As of 3QFY18/18, the ratio is still below 50%. While the ratio is still low compared to other airlines, it will be useful to watch the gearing ratio in the coming quarters. The wholesale bonds are still trading above par, probably indicating that institutional investors still like the credit profile of the bond.

Company is still highly profitable and paying good dividends - I have mentioned earlier that the Company is one of the most profitable airline companies in the world. In the event that it needs to tighten its belt, it can cut the high dividend payout ratio and you can see it from the financials deteriorating further.

Rising fuel costs amidst competitive landscape - The potential rise in fuel prices will continue to squeeze operating margins. The airline industry is also highly competitive and SIA being a "premium" product, will face pricing pressure from other airlines. The fact that Singapore wants Changi Airport to be the key airline hub also means that it has to be operating at its best to compete with other premier airlines like Qatar and Emirates that has a lot of "government" support. The rise of budget air offers more choices for air travelers but i would not expect it to adversely impact SIA

High capital expenditure - SIA must always invest in new planes with better fuel efficiency and keep the age of the fleet young. For example, it can restart the "longest flight in the world to New York" only because of technologically improvement. This means constantly buying new planes to keep the fleet young and efficient. The bonds issuance is to pay for the delivery of 37 A350, 39 B787 and 20 B777 scheduled for delivery from 2019 to 2025.

Safety regulations over 737 Max - The recent grounding of the 737 MAX aircrafts at Silkair may also impact the company. It is costly to keep idle planes on the ground and there is no visibility over when the ban will be lifted. There is another 32 on firm orders. In any case, the industry is highly regulated.

The interest rate is not attractive enough to compensate the risk -  While i believe the Company will be able to pay its debt, i don't think it is high enough to compensate investors. It is priced too tightly to the 2.7% Temasek AAA-rated bond. You may argue that the interest rate environment has become more benign but at 3.03%, it is a tad too low for my investment needs.

I like the way Financial Horse phrased it as to who will find the SIA retail bonds suitable - High net worth individuals with excess cash or retirees who want a low risk investment that is higher than the risk free rate.

With an option to upsize, retail investors will probably be able to get a larger allocation than that of Astrea IV or Temasek.

For me, i also have mixed feelings. On one hand, I am happy that T-chip companies are helping to open up the retail bond market, on the other hand, i would have preferred a high interest rate of at least 3.5%, given that it is un-rated and not secured.

It is a 1 chilli rating for me. I would have given it a higher rating if the interest rate was >3.5%

Subscribe only if you like the credit profile of Singapore Airlines and has spare cash that you are putting into bank deposits for the next 5 years. I have other uses for my cash.

You can take the poll here. 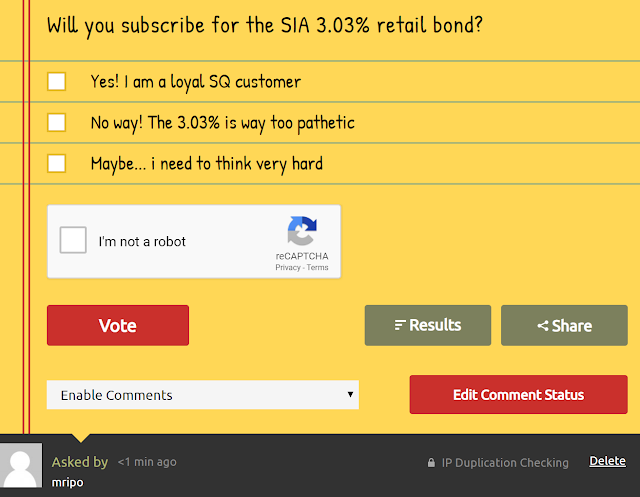 Thanks for the mention. Enjoyed this write up. I think you are right that Astrea and T left some money on the table for retail investors. Probably gonna skip this too.

My pleasure. I write from the heart so I sincerely meant it when I say it’s worth reading your articles. Keep up your momentum!

National airlines are generally safe. But histories have taught us that black swan events can happen. In the past, we have seen national airlines like Swissair collapsed because of major air accident. I am not saying that SIA may face the same thing but I am just saying that you should be careful in investing something that carries real risk for that additional 1% above SSB. Temasek may be a major shareholder but it is also known to run away faster than anybody else at the first sign of trouble. It is an investment fund anyway and they are not there to save anybody's skin. Is that 1% really worth it?

Perhaps you can share some examples on how Temasek run away ...?

No specific example. With regards to that point, I am just trying to emphasize that Temasek may a major investor in this but that does not mean that they have the obligation to save your investment if it turns sour. I hope nobody is investing just because Temasek is there. Anyway, thanks for the detail write up. It is always a pleasure reading your blog.

Haha ok. Same point which I was making. I do think that the parentage is plus more than a minus and is one of the many other reasons why you consider whether it is worth investing.

I'm alloted 20 lots for this SIA 3.03% Bond from the balloting results tonite.

If example sometime within the next 5 years this SIA 3.03% Bond were to drop to 96 cents and I buy another 30,000 units from the open market at 96 cents, meaning I will altogether own 50,000 units of this SIA Bond and I just keep my this altogether 50,000 units for the entire 5 years period.

The short answer is yes. You get the “par” value of the bonds back at redemption.

Currently I am not vested in this bond.

Q1) As Long as you buy the bond before the XI date, you will be entitled to the first coupon. With regards to the exact date, it will be announced by the issuer in April.

Q2) this is over simplifying it. Bond investors usually look at the Yield to Maturity. You can check the YTM with your broker. I understand SGX will be implementing such info on their website in due course.

you are dead wrong!