Click to understand how it works
Labels
Posted by Mr. IPO March 07, 2019

Reclaims Global Limited ("Reclaims Global" or the "Company") is offering 20m shares for its IPO on Catalist at $0.23 each. 18m shares will be via placement with 2m shares for the public offer. The offer will close on 7 March 2019 at 12pm. The market cap is $30.1m.

The Company is based in Singapore and provide services to the construction industry, specializing in the recycling of construction and demolition waste, customization of excavation solutions and operating fleet management.

The 3 key lines of businesses are presented in the table below: 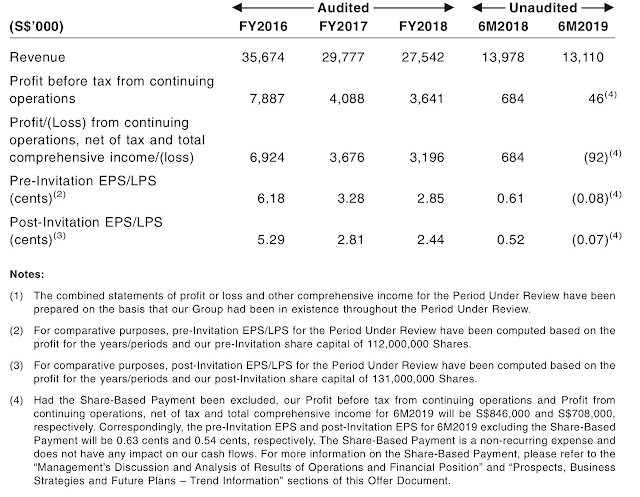 Reclaims Global revenue has been declining over the last 3 years and net profits has also decreased from $6.9m to $3.2m in FY2018. For the 6 months FY2019, the revenue was stagnant and it also reported a loss due to share based payment. Excluding the share based payment, the EPS is also stagnant at 0.54 cents (see footnote 4).

The EPS for FY2019 is likely to be worse than FY2018 given the 6m loss as well as the service agreements.

Given the likely poor FY2019 performance, i would say that the forward PER is much higher than 12x, which in my view, is very expensive in the current market environment.

I understand from sources that the Company has lowered its market valuation expectation, hence the historical PER ended at 8x. However, has the service agreement been in place, the PER would have increased to 11x.

While I appreciate the Company setting aside some 2m shares for the retail investors, the declining revenue and profitability is a concern. In addition, the weak IPO sentiments here is not helping as well. I would avoid for now.
Email Post
Labels: 0 chillis Construction SAC Capital Singapore