Click to understand how it works
Labels
Posted by Mr. IPO March 09, 2017 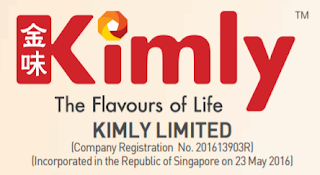 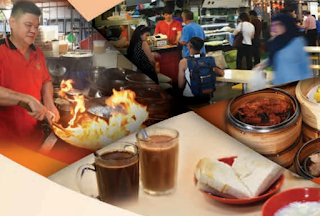 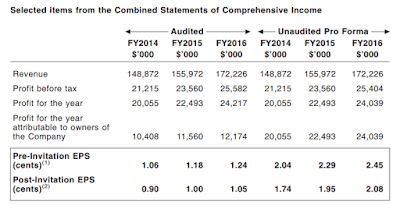 According to the prospectus, if the service agreement is in place, the EPS will be 2.01 cents for FY2016. This translate into a historical PER of around 12.44x. Assuming a 50% payout, the implied dividend yield is around 4%. 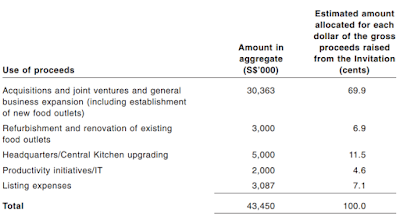 Nothing controversial. Majority of the proceeds will be used to expand and improve its productivity and efficiency. 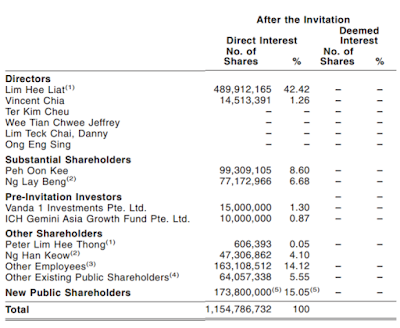 Mr. Lim Hee Liat is the substantial shareholder with ~42% stake with other founding members. There are 2 institutional investors - namely Vanda 1 and ICH Gemini Asia.

Vanda 1 is managed and controlled by Heliconia Capital Management. Heliconia also invested in Jumbo as a cornerstone investor in October 2015. My write up on Jumbo is here. The presence of Heliconia as pre-ipo investor bodes well and both Vanda and ICH will be subject to lock-up. The effective price paid by the pre-IPO investor is around 20c. I expect both investors to be vested for the longer period post IPO.

I received the above table from my friend and it looks fine. Helped me save time as i don't have to recreate my own list. The peers are trading at an average PER of around 24x!  Japan Food is trading at around 17x PE and at 4.4% yield.

The IPO is priced very attractively vis-a-vis its peers. This is a good chance to own some coffee shops that is highly cash flow generative, has no debt and gives you a yield of more than 4%!

(Do note that Mr. IPO is vested hence the view is super biased)

Anonymous said…
Mr IPO, did you manage to get any placement? also can you recommend whats the min to bid to have a chance?
10 March 2017 at 07:32

Unknown said…
Can i ask why i cant find the ipo application at uob atm? Thought there is application for the public
10 March 2017 at 09:49

Anonymous said…
I write so big I am vested still cannot see ah!!!

How do you derive the fair value of 31-38 cents? is there a formula?

Appreciate your guidance and many thanks for your write-up.

PS: i am not trying to find fault with your article.

Mr IPO Fan said…
Hi Mr IPO, I am a true fan and I'm not finding fault in your article, but I would like to refer you to the sentence in your article: "According to the prospectus, if the service agreement is in place, the EPS will be 2.01 cents for FY2016. This translate into a historical PER of around 12.44x. Assuming a 50% payout, the implied dividend yield is around 4%."

I note from the offer doc that it pertains to the employment of the 2 EDs (Mr Lim Hee Liat and Mr Vincent Chia) in the Company. Are you basing your PE on the assumption that the 2 EDs achieves the highest incentive (PBT > 30m)?

Anonymous said…
thanks for the explanation. I understand that average market P/E ratio is 20-25 times earnings. Using 15 and 18 is pretty conservative.

Did you manage to get placement or via ATM?

Anonymous said…
Hi, just a curious question. Will the fact that the IPO be on the catalist board be an issue for small-time investors? Thanks!
10 March 2017 at 21:14

Anonymous said…
The founding member Mr Lim Hee Liat purchase cost is only at 3.7 cents. Hence at IPO price of 25 cents, his shares value would have increased by more than 6 times, implying his networth will be more than 100 million.

The prospectus also mention that he is estimated to be paid a salary between 250K to 500K in FY2017. Being a substantial shareholder post IPO (~42%) plus his 100 million ++ networth, am not comfortable that he still intends to remunerate himself so generously. My personal opinion - this does not reflect best interests for the minority shareholders.

Mr. IPO said…
If you own a biz, I think you wouldn't let go unless you think the valuation is fair. He is 51 already. This would be a exit option for his family and other founders eventually. You shouldn't buy if you are not comfortable. 😊
11 March 2017 at 06:10

Anonymous said…
"Two food stalls at Jurong Point’s Kopitiam suspended due to cockroach infestation"
I heard this from the news. May I know will this affect the IPO opening price?
Thank you.
15 March 2017 at 03:03

Unknown said…
I have try doing it but I can't seem to get the answer. The post invitation nav is higher than pre invitation, is it due to the cash generate from this IPO ?
15 March 2017 at 17:58

Anonymous said…
Lease, both HDB and Private. In fact, Kimly existing shareholders do own Coffeeshops. From the prospectus, 17 Coffeeshops, owned by different relavent shareholders, will be leased to Kimly Limited at market rental value or lower.
16 March 2017 at 16:30

Anonymous said…
Hi, may I know how to know the result of whether if how many of my IPOs are successfully subscribed? I am a newbie who 1st time subscribe ipo ��
16 March 2017 at 20:43

Mr. IPO said…
Just check the bank account which you applied for the shares to see if you receive full or partial refund. That will usually be the fastest "indication" to see if you are successful. The internet banking IPO results will also tell you if you are successful. Check the SGX announcement for balloting results. Check the CDP as a final resort if still unsure.
16 March 2017 at 23:30

Anonymous said…
I have 6 lots of this IPO. Is it better to just sell off the 6 lots on the first debut day or this stock can hold for mid-term a few months for better upside?!

Will this stock's price be like Jumbo, Jumbo 1st day trade very high and many of those vested quickly sold off on the 1st day, but Jumbo the next few days to next few weeks rose even much higher than it's 1st day price!

Mr. IPO said…
This is the decision you will have to make. My role is just to share whether I would subscribe to the IPO or not since you won't be sharing your profits with me 😝 😅😂
17 March 2017 at 18:20